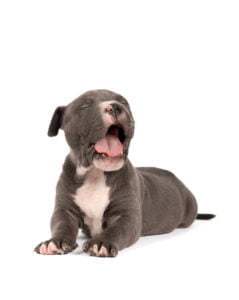 Are you interested in buying this American bulldog? Please contact us and ask for availability. We regularly have new litters with cute puppies.

The American bulldog is a loyal and reliable watch and companion dog. He is confident, determined and brave, so he does heroic deeds for his family without hesitation. He has a highly developed instinct to protect his family and unseen alertness. Yet he has not a shred of animosity in him. Their natural reserve towards strangers can be easily adjusted with consistent obedience training. It is also important to socialize him properly. Furthermore, American bulldogs are diligent working dogs, which are even used in bullfights in Spain. But also for farmers, this is a popular variety due to their versatility and eagerness to accomplish various tasks. Hunters like to take them along to help score (wax) bears, wild boars or squirrels. Their intelligence also makes them easy to train.

American bulldogs are powerful, muscular, sturdy purebred dogs. Yet they are also remarkably more agile and faster than them English and French counterparts. This is partly because their legs are slightly longer. They are known for their agility and light-footedness and can jump high. Males are generally heavier than the females, which have a slightly more refined build. This bulldog species grows to between 48 and 71 cm and weighs between 30 and 58 kg. American bulldogs have a short, dense, glossy coat that comes in many different colors and gradations. A black coat color is usually preferred over a white one.

The chest of these dogs is broad and moderately deep. Their broad shoulders support their muscular necks with a large, squarish skull, broad square muzzle and strong jaws. The small ears and rounded, almond-shaped eyes are quite far apart. Although the eyes are usually brown, they can come in other colors as well. Even irises of two different colors can be found, usually brown and blue. The nose is preferably black, but can also be brown, red or ‘grizzle’. American bulldogs have a pointed tail that starts thick at the base and tapers towards the tip.

An American bulldog is particularly good at hunting, guarding, pulling weight and tracking. You can also train these dogs to protect stock from predators or to herd livestock. They are only truly happy when they are engaged in their activities, can feel useful, and can be close to the people they love. That’s why they really need a solid dose of daily mental and physical exercise. Otherwise they may show behavioral problems. On average, the American bulldog lives 11 to 12 years.

With the support of: