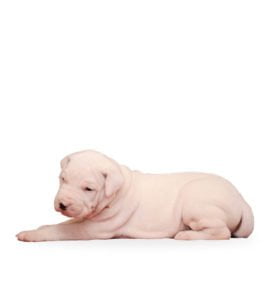 Are you interested in buying this Argentinian Dog? Please contact us and ask for availability. We regularly have new litters with cute puppies.

The Argentinian dog or ‘dogo Argentino’, as the national dog of Argentina, was used in its country of origin to hunt large animals such as wild boars and pumas. The dogo Argentino belongs to the same FCI breed group as the pinschers and schnauzers, among others. Often these are excellent guard and defense dogs with a strong character. Nowadays this dog is usually used as a guard and family dog. He loves company and can behave very calmly, affectionately and obediently. Nevertheless, this robust four-legged friend is also very active and energetic and has to lose that energy somewhere. It is going to be a frequent barker but he doesn’t like much of his kind. He can be aggressive and dominant towards other animals.

The dogo Argentino is a large, respectable dog with a lot of physical strength. Because of his muscular build, he can be quite daunting. This is also because many specimens have docked ears. That is, the ears were surgically shortened or removed. Initially this was done to protect these dogs from injuries while hunting. But today such interventions are considered barbaric and obsolete. Docking is only done for aesthetic or cosmetic reasons and is prohibited by law. Originating in Argentina, this custom really only gives this breed an unfairly dangerous appearance.

The Argentine Dog’s lively eyes are dark or hazel-colored and set wide apart. Its tail is long and coarse. Argentine Danes have resilient, elastic skin. In fact, this is the only dog breed with a skin that does not tear. The short, hard coat of this hunting dog is white and shiny. Often spots appear on his coat, which according to the breed standard may only take up a maximum of 15% of the total coat surface. This dog breed belongs to the giant breeds. They can grow to between 60 and 68 cm high and weigh 40 to 50 kilograms. Nevertheless, this powerful dog, with a sturdy neck, broad chest and strong back, is not heavy.

An Argentinian dog needs a strict, consistent but loving upbringing. His owner must also start on time with this. This dog prefers an experienced owner who can be strict without being cheeky. After all, the dogo Argentino is a very sensitive dog. You can keep this dog in an apartment as long as he can go outside at least twice a day to romp. This dog feels good in the open air, so he will certainly appreciate a large garden or a regular visit to a forest or park. The average life expectancy for this breed is 12 years.