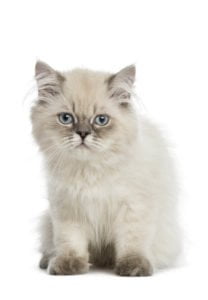 Are you interested in buying this British medium hair? Please contact us and ask for availability. We regularly have new litters with cute kittens.

The British medium hair or British long hair originated during the breeding of the British shorthair . Because people were so fond of the stocky nature of the shorthair, Persian longhairs were sometimes used in breeding to preserve this trait. As a result, British Shorthairs were born with long fur hairs, which were then given a different name. These British (semi) longhaired dogs became a recognized breed and are known as ‘lowlanders’. The fact that they combine features of the British Shorthair with those of the Persian cat , are what makes this breed so popular. This cat also has a sweet character. It is a pleasant, easy-going family cat that loves children. She is therefore balanced and calm and requires less intensive exercise than her short-haired ancestor. In short: it is the ideal house cat!

British medium hairs have quite a muscular body. They are solidly built and need sufficient exercise and a healthy diet. The lowlander has short legs under a strong, wide chest. This purebred cat can also be recognized by its round head with large, dark beaded eyes and a short, wide nose that shows a small indentation. She also has small, round ears and a graceful body. In addition, these cats show off a thick, soft, medium-length coat. It is longer than that of the British Shorthair but then shorter than that of the Persian cat. In combination with their dark beaded eyes, the typical coat gives this cuddly house cat a teddy bear-like character. There are 300 coat variations. One of the most popular of these is silver!

Obviously, cats with a medium coat require more maintenance than cats with a short coat. So a British semi-longhair is more work than her short-haired ancestor. It’s a good idea to brush her coat regularly. British semi-longhairs like to be close to their owners. They like to have their own place or lookout post in the living room, preferably with some toys nearby. In a separate room they will feel excluded. But it is actually not a demanding cat. She will certainly not ask for attention all the time, but rather subtly announce that she wants to play. It is therefore fun and good to play with this sweet house cat. She is even intelligent enough to learn to fetch, just like a dog. British semi longhairs have an average life expectancy of 7 to 12 years, which is not that long compared to other breeds.