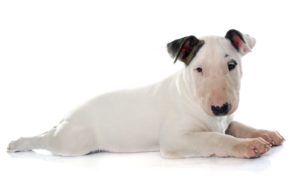 Are you interested in buying this Bull Terrier? Please contact us and ask for availability. We regularly have new litters with cute puppies.

The Bull Terrier is known for its protective nature. This English breed dog will intervene fearlessly and courageously when his owner or territory is in danger. Due to its typical external characteristics, it can give a rough impression. However, a Bull Terrier is cheerful, friendly and spontaneous. They can be stubborn, but they are also quite affectionate towards their family. Because they can take a beating and are tolerant, they usually get along well with children. A male can show dominant behavior towards another male.

An average Bull Terrier weighs about 24 to 28 kg and measures about 53 to 56 cm high. However, there are no height and weight limits. Bull Terians have a muscular body, a typical ovoid skull with a tapering muzzle. Their eyes are small and triangular, and they have thin, erect ears. The tail is short and pointed and the coat is short-haired. The most common colors in a Bull Terrier are solid white, white with markings on the head and white brindle. But other colors are also found such as red and black brindle or fawn colored. The coat can even be tricolor. With colored variants, the color must predominate.

Bull Terriers have a remarkably high pain tolerance and are often physically hard on themselves. Obedience training is a good idea for this breed. They also really like that. This dog represents class and style. He was long the favorite of many English gentlemen because of his refinement. Its coat is so short that it requires little maintenance. During moulting, removing the loose hair a few times with a rubber glove or fine comb is sufficient. Do not bathe the Bull Terrier, unless it is really necessary. You can just as well clean with a damp chamois leather. Bull Terriers can live up to 11 to 13 years old.