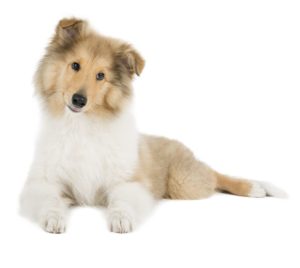 Are you interested in buying this Collie? Please contact us and ask for availability. We regularly have new litters with cute puppies.

The Scottish Shepherd or Collie is originally a sheep herder. It became one of the most famous dog breeds because Queen Victoria chose this breed as a house dog. Later he became even more popular with the television series Lassie . This intelligent animal is very eager to work and an excellent watchman due to its alertness. Collies mainly protect young family members so they get along very well with children of all ages. It also clicks well with other people under one roof and even with cats! They receive a well-known visitor warmly, but a Scottish Sheepdog is quite defensive towards unwanted visitors. The Collie is self-assured and willful as well as sweet, gentle and reliable. This smart, cheerful family dog is a real companion.

Scottish Sheepdogs come in two coat types. The most famous is the long-haired, like Lassie. The short-haired is less known but also very beautiful. These two types are considered separate breeds. Common coat colors include sable (ranging from light gold to deep mahogany) with white, tricolor and blue merle. The typical white markings are common in the collar. The best known coat color is the tricolor black-brown-white. In addition to this typical coloring, the elongated snout is also a typical characteristic of the Scottish Shepherd.

A Scottish Sheepdog or Collie is one of the easiest breeds to train. At least he needs a medium sized garden but can also thrive in an apartment if given enough exercise. It is better to keep this dog indoors in warm weather. A Collie sheds a lot of hair during the moulting periods. The short, wiry coat of the short-haired variety requires daily brushing to remove excess hair. With a long coat you naturally also have a bit more work. Scottish Sheepdogs live to an average age of 14 to 16 years.