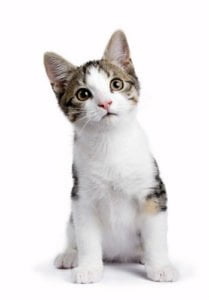 Are you interested in buying this European shorthair? Please contact us and ask for availability. We regularly have new litters with cute kittens.

The European Shorthair is an alert and lively cat. This good-natured and loyal cat adapts easily and likes lots of company and quiet environments. However, this cat is not a wallflower. She is playful, active and surprisingly strong. She has a stable character and adapts very easily.

A European Shorthair stems from the original European domestic and farm cats. She is more even in stature than the British shorthair , which is a bit more compact. This cat is mainly bred in the Scandinavian countries. She has a friendly, rather round head and a sturdy build. The coat must meet certain requirements in terms of quality, color and pattern distribution. The cats are only allowed to show color and pattern combinations that fall within the European color spectrum of the domestic cat. Once Eastern visual features are present such as partial albinism, this cat does not belong to the European Shorthair breed. Colors (patterns) such as chocolate, cinnamon and picked tabby are also not allowed.

Due to their resemblance, European Shorthairs are often equated with the common house-garden-and-kitchen cat. They do not require much maintenance and are undemanding. Outside the moulting period, weekly brushing is more than sufficient. This cat is a good hunter and likes to run around outside, so if you have a large yard, that’s definitely a plus. Keeping them as an indoor cat should provide plenty of distraction and toys. Males of this breed can weigh up to 8 kg. These cats live an average of 15 to 20 years old.