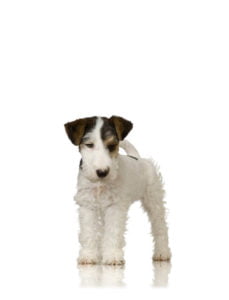 Are you interested in buying this Fox terrier? Please contact us and ask for availability. We regularly have new litters with cute puppies.

The character of the Fox Terrier depends on the species. You have two types of this breed: a smooth-haired and a wire-haired variety. The latter may have arisen from a cross between the English Terrier and the smooth-haired Fox Terrier. As its name implies, this dog was bred to drive foxes out of their burrows while hunting. A well-known Fox Terrier is Tintin’s dog: Bobby. Like bobby, these dogs are generally loyal, intelligent, brave and good with children. The smooth-haired variety is known for its sweet, devoted, loyal and affectionate nature. They are excellent watchers who get along well with older children. The wirehaired variety is less suitable as a guard dog and is known for its enthusiastic and energetic disposition and sense of humor. He always brings life to the brewery. It is pleasant company for children but less compatible with other animals, unless they are well trained at a young age.

The two varieties of the Fox Terrier differ from each other not only in character but also in coat. The build of these dogs is quite similar. The coat is usually white, with or without brown and / or black spots. The ears are kinked and V-shaped. While the smooth Fox Terrier’s coat is short, flat, dense and smooth, the Wire Fox Terrier has a broken coat, giving it a shaggy appearance. The hair of this breed has to twist and is therefore always a bit longer on the muzzle. That’s why it looks like he has a beard. It is also normal for their coat to feel harsh and wiry.

Fox Terriers are quite prone to health problems such as cataracts and deafness. They are loud and playful and like a lot of space. So a large garden is definitely a plus. Without a garden, they definitely need to be given enough attention, exercise, and stimulation. This is a dog that enjoys walking, hunting, and playing with Frisbees and balls. You need to train a Fox Terrier early and intensively and raise it consistently and firmly to make it obedient. Wirehaired Fox Terriers in particular can be quite stubborn. This variant can also jump very high, so make sure to provide him with a fence of at least 6 meters high.

The smooth Fox Terrier requires less maintenance than the Wire Hair. The first variant requires occasional brushing with a stiff brush and a professional trim twice a year. With the wirehaired variety, you should have the coat plucked regularly by an experienced groomer to avoid dead hair. The beard should be brushed and cleaned often to prevent dirt from sticking and mats from forming.

The Fox Terrier can grow up to 39 cm in height and weigh up to 9 pounds. The males are slightly heavier than the females. Typically these dogs live to be 13 to 14 years old.