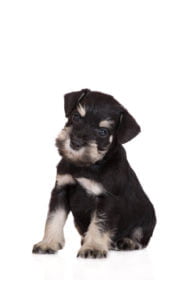 Are you interested in buying this Miniature Schnauzer? Please contact us and ask for availability. We regularly have new litters with cute puppies.

The Miniature Schnauzer or ‘Zwergschnauzer’ is the mini version of the medium range schnauzer or ‘wirehaired pinscher’. While the Standard Schnauzer was mainly used as a protector of people and locations, the Miniature Schnauzer was often tasked with exterminating pests on the farm. He is smart, obedient, agile and athletic enough to excel at this. Where this little German dog used to chase mice, rats, squirrels and birds on a daily basis, he is now mainly a sweet domestic companion. However, hunting small vermin is in its nature, so you will not easily see a rodent in its vicinity. It is best to keep the smallest pets in a separate room. This lively and active dog also loves to chase and warn his owner when someone is at the door. Whatever you plan to do, he wants to be a part of it already. He may be small in stature but big in personality!

The Miniature Schnauzer resembles the Medium-sized Schnauzer. However, it only grows to a height of 30 to 35 cm and reaches a weight of around 6 to 7 kg in adulthood. It has a soft undercoat with a rough, harsh outer coat. By far the most common coat color is pepper and salt. But black (with silver) is also common. The white miniature schnauzer is accepted by the breed standard in Germany but not in the United States.

Miniature Schnauzers may not be large but they are definitely not lap dogs. They cannot sit still. They bring a lot of life into the house and are most delighted in a large house with a large garden. There they will run around and dig for hours. They can be naughty at times, but fortunately they can also be trained very well. This is also necessary if you do not want him to bark too much, because he would much rather use his voice to intimidate than fight. In an apartment, they only do well if they have enough activity.

Being so obedient and easy to train, they often participate in dog competitions. You can also keep well-bred Miniature Schnauzers with other dogs without any problems. A cat is a bit more challenging. The coat of the Miniature Schnauzer does require some attention. You can pluck or shave it or have it done by a professional dog hairdresser. Daily brushing with a coarse brush also helps limit their hair loss. When properly cared for, the Miniature Schnauzer lives an average of 14 years.