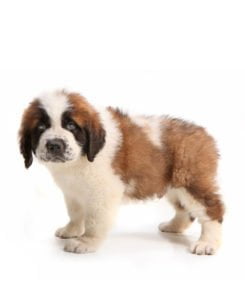 Are you interested in buying this Saint Bernard? Please contact us and ask for availability. We regularly have new litters with cute puppies.

A Saint Bernard used to be called ‘Alpine Mastiff’, ‘Noble Steed’, ‘Saint Nicholas’ or ‘Barry Dog’, after the famous dog that is said to have saved the lives of more than 40 people. It is best known as a rescue dog, but it is also an excellent family dog. This calm yet impressive medium-sized four-legged friend has a kind-hearted and sensitive character. Still, a St Bernard dog can be quite stubborn and his tendency to protect his territory is sometimes quite strong. Despite their rather sad expression, Saint Bernard’s are cheerful, sensible and loving animals. Especially with the right amount of love and attention, they are friends for life. They are also excellent watchdogs.

The Saint Bernard as we know it today is less used as a rescue dog due to its heavy physique. An average specimen is between 65 and 90 cm high. Females are usually a bit smaller than males. These dogs can weigh up to 100 kg. The heavy head of this purebred dog has a slightly pleated skin, a short, square nose and slightly drooping lips. The high set ears also hang down like triangles. Saint Bernards have a short, little pleated neck and a broad back. These dogs have wide, closed feet and a long, heavy, hanging tail. Their flat, dense, two-layered coat can be long or short. That distinctive coat bears the typical colors for a Saint Bernard: reddish brown or brindle with white markings on the chest, legs, nose, neck and tail tip.

Saint Bernard is named after the mountain pass of the same name in the western Alps between Switzerland and Italy, the monastery and its founder, the monk ‘Bernard of Menthon’. The breed is related to the Swiss mountain dogs and descends from the rescue dogs from that region. The typical image of the Saint Bernard dog with a barrel of brandy (rum), whiskey or cognac on his collar is a figment of our pop culture based on the popular belief that these dogs could warm up in danger of cold travelers. In reality, alcohol is supposed to cool the body faster. Because of the family movie Beethoven The Saint Bernard has become immensely known and still proudly carries his reputation as an intelligent rescue dog. A slightly darker image of this dog appears in the well-known horror book Cujo by Stephen King, in which a rabies-infected Saint Bernard terrorizes a family.

This big, heavy cuddly friend, like all large dog breeds, has a slightly increased risk of ailments such as hip and elbow dysplasia. That’s why St Bernards usually don’t get that old. Their average life expectancy is approximately 10 years.