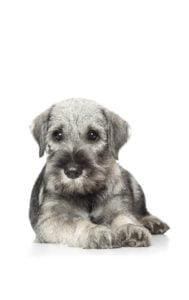 Are you interested in buying this Schnauzer? Please contact us and ask for availability. We regularly have new litters with cute puppies.

The schnauzer is a German purebred dog that was particularly popular in Munich. There he lived among the horses as an attendant of a horse and cart. Initially, it was mainly the working class who took him as a pet. Females especially tend to watch over people. Males, on the other hand, are more likely to guard the terrain. This elegant terrier is a very popular companion dog due to its nice disposition. He is obedient and affectionate, yet spirited, brave and intelligent. He is sweet to children and very fond of his housemates, but certainly not everyone’s friend.

A Schnauzer is basically the same breed as a German Pinscher, although the coat structure is slightly different. The schnauzer is also called ‘wirehaired pinscher’ and is bred in 3 sizes. The ‘Giant Schnauzer’ (Giant Schnauzer) is the largest variety. Then you also have a medium range schnauzer or ‘Mittelscnnauzer’, the standard. Finally, there is also one miniature schnauzer . The ‘normal’ schnauzer (middle stroke) grows to about 50 cm high and weighs about 14 to 20 kg. He is recognizable by his typical schnauzer beard. Its coat consists of rough, hard guard hairs of a bright color and a soft, woolly undercoat of a lighter color.

Schnauzers shed fur but don’t cause too much of a nuisance if you take good care of them. In any case, it is good to brush the coat daily with a coarse brush. You can pluck the coat during the moulting period. You can also get the coat trimmed to get rid of all dead hair in one go. Trimming around the eyes and ears is a must. You should also always clean the whiskers after meals. And it is best to have a schnauzer cut professionally twice a year.

The schnauzer has highly developed senses. He is full of energy and needs plenty of physical exercise daily. Schnauzers love to roam free in a safe, fenced-in environment and enjoy long, brisk walks. Play sessions with their family members also revive them. They are popular search and rescue dogs and are also used successfully as therapy dogs. Their life expectancy is between 12 and 14 years.