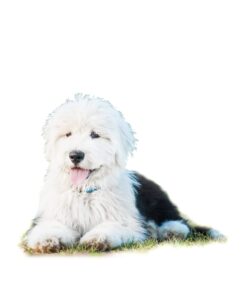 Are you interested in buying this bobtail? Please contact us and ask for availability. We regularly have new litters with cute puppies.

When you hear ‘Bobtail’, you think of Samson. However, Samson is not really a Bobtail but a cross between a Bobtail and a Bearded Collie. But many people mainly see the ‘Bobtail’. That is why Samson would first be called ‘Bob’ and his girlfriend is still called ‘Bobientje’. The resemblance is not far-fetched, because especially the character of a Bobtail largely resembles that of Samson.

These dogs are very obedient and child-friendly. You can also easily put them together with other dogs. They are endearing, sweet playmates full of zest for life, integrity and loyalty to their owner. In short: a Bobtail is an ideal family dog. These cuddly four-legged friends are fearless but reliable, friendly to outsiders and other animals. Their even-tempered nature makes them a safe choice to have in your home. They are also not nervous or aggressive. This gentle English sheepdog is also known for his optimism and intelligence. He likes to give his full attention to his family, although he can be quite boisterous as a puppy.

The long, beautiful coat of the Bobtail is gray, drab, or bluish gray with white markings, which are sometimes very large. This woolly childhood friend can grow to be 53 to 64 in height and weigh between 35 and 40 kg. Puppies start with a black and white puppy coat. Then they get a light gray youth coat that eventually grows into a dark gray adult coat. The back of that coat should not curl. Bobtails have small, drooping ears, a long neck and heavy legs. Those are the most striking external features.

The long, shaggy coat of a Bobtail requires intensive care. It is necessary to brush this sweet four-legged friend regularly. It is better to do this thoroughly and regularly than to brush for hours once a week to get all the tangles out of the coat. From the root of the coat, you can brush the hair layer by layer and gently loosen tangles. This is important so as not to hurt your faithful friend so that he doesn’t hate a brushing session. If a Bobtail gets used to these brushings early enough, he won’t find it unpleasant and it can even become a very bonding moment between him and his groomer. Coat hygiene is therefore extremely important, because it has a major impact on the overall health of your dog.

Bobtails need a gentle, consistent approach to training. They don’t require much experience from you as a dog educator, so they are ideal dogs for owners with little experience. Also, these dogs need a lot of exercise. They like to play with the ball and like to fetch objects. If you take good care of them, Bobtails live an average of 11 to 15 years.