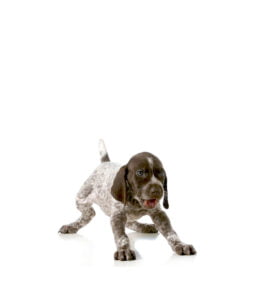 Are you interested in buying this German Shorthaired Pointer? Please contact us and ask for availability. We regularly have new litters with cute puppies.

A German Shorthaired Pointer or German Pointer is a versatile, hardworking four-legged friend with great stamina and excellent hunting qualities. But this reliable hunting dog also does very well as a companion dog with its balanced and calm temperament. As a family dog, it retains its eager-to-work and willing character without becoming nervous or coercive.

This tireless dog naturally remains a great hunting companion. Shorthaired pointers are energetic, stylish hunters. They are not shy or aggressive by nature but can use an outlet on a regular basis. Give them plenty of exercise and they are playful, friendly companions for young and old. The character of German uprights is quite similar, although there may be small differences with other coat types (longhair/wirehair).

The active German upright is an elegant appearance. This dog is harmoniously built and gives a powerful, quick impression. Its flowing lines in combination with its broad, flat domed skull and powerful, muscular jaws are sure to leave an impression on passers-by. Maybe that’s partly due to his captivating dark brown eyes.

This breed has a medium-length tail and tight, shiny skin. The coat is short, thick and hard. It can be brown without markings, with slight white or speckled markings on chest and legs, or with a brown head. Dark brown (fungus) with a brown head and brown plates or spots also occurs. Finally, there are also light brown (fungus) and white variants, with or without brown or black markings on the head, plates and/or spots. Yellow markings are also allowed with this breed. And as described earlier, there is also a longhair and wirehair variation of this shorthair.

The height at the withers of a male varies somewhere between 62 and 66 cm. Bitches are between 58 and 63 cm high. The weight of this beautiful four-legged friend is usually between 25 and 35 kg.

A German upright does not like to stand still for long. He excels in courage and perseverance. It is an excellent hunting dog and driven retriever. In the Mediterranean, these dogs are mainly used as hunters for livestock and falcons, but they also do well with other waterfowl and small game.

A German Shorthaired Pointer is a hard worker and an easy eater and requires little maintenance to its coat. Outside the shedding period, you should only brush it occasionally. These intelligent dogs are eager to learn and fast. Thanks to their strong character, they also show a great sense of initiative. But since they can usually predict what you expect from them, they are easy to train. Especially if you teach them early and clearly enough what is and is not allowed. It also helps that they like to please their owner. In the absence of their owner, they can certainly be used as watchmen.

In general, a German upright does not cause any problems with conspecifics and children. They can even get used to being around cats and other pets from an early age. On average, these champs live to be about 10 to 12 years old, but older specimens are certainly not rare. As always, good care ensures a long life.