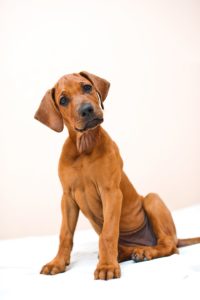 Are you interested in buying this Rhodesian Ridgeback? Please contact us and ask for availability. We regularly have new litters with cute puppies.

The Rhodesian Ridgeback was bred in Africa. This characterful, smart dog is a versatile hunter and watchdog. Ridgebacks are honest and loyal to their owners and reserved around strangers. They are also a bit quirky. In families with many small children, a Rhodesian Ridgeback is not the most obvious choice. However, they are quite balanced dogs. As good watchmen, they are also confident and courageous. They only bark when something is really going on. Rhodesians don’t like to be left alone for long.

The Rhodesian Ridgeback’s male measures 64 to 69 cm to the shoulder. The bitch is slightly smaller with a height of 61 to 66 cm. A male weighs an average of 36 kg and a female 32. The Ridgeback’s coat has a distinctive marking along the back. This is because this coat hair grows in the opposite direction. Its glossy coat is short, dense and sleek. Common colors are light to reddish or wheat color. Sometimes there is a little white on the chest.

A Rhodesian Ridgeback sheds on average and requires relatively little care. Only when it is really necessary should it be washed. This tireless breed will provide you with the necessary activity. The playful, active Ridgebacks have enormous stamina. They can expend their energy in a brisk, long walk. Still, it is recommended to let them run around in at least a medium-sized garden. The Rhodesian Ridgeback lives on average 12 years.