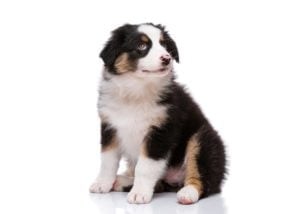 Are you interested in buying this Australian Shepherd? Please contact us and ask for availability. We regularly have new litters with cute puppies.

The natural versatility of the Australian Shepherd or ‘Australian Shepherd’ makes him suitable as a farm dog and house companion. They are tireless and hardened in their work. Yet they are also very attached to their family as a house protector. They generally get along well with children. As alert guards, they only bark when they feel threatened. They are very smart and eager to learn, so they are also very suitable for training.

The male of the ‘Aussie’ is on average about 50 to 58 cm high. Females are usually a bit smaller with a height of 45 to 53 cm. Males also usually weigh more than females. They weigh 23 to 30 kg while females weigh between 14 and 20 kg. The striking coat of this beautiful breed comes in a variety of colors. Black, blue merle, red and red merle are the most common. Brown or white markings may also appear on the muzzle, chest and hind legs. Their eyes also show various shades: blue, amber, hazelnut and many other browns. There is a variant of the Australian Shepherd with a naturally shortened tail: the so-called ‘stumpy tail’. These are also available from us.

Early socialization is important with an Australian Shepherd. This breed also requires a lot of exercise. A short walk a day is by no means enough. Most of all they prefer to work diligently for their owner. The maintenance of this dog is then very good. It only sheds twice a year, which is moderate. Brushing their coat every now and then with a stiff brush is sufficient. Washing is not necessary unless the coat is really dirty due to circumstances. Due to their keen learning ability, they are easy to train but require a lot of variation. They quickly find repeating exercises boring. Usually, the ‘Aussie’ lives between the ages of 12 and 13.