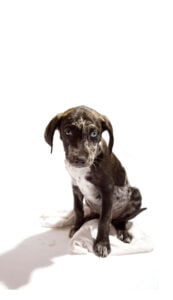 Are you interested in buying this Catahoula leopard dog? Please contact us and ask for availability. We regularly have new litters with cute puppies.

The Catahoula leopard dog or Ursus familiaris is the official dog of Louisiana, USA. This “pig dog” from the north is also known as Catahoula Cur or Catahoula Hog Dog. Originally, this industrious, hard-working breed was bred to capture wild pigs and cattle and transport them to the market or slaughterhouse. Now Catahoula leopards are mainly kept as companion dogs due to their loyalty and gentleness. But they are also excellent watchmen, being wary of strangers. These loving family dogs are neither shy nor aggressive. They are serious and business-like with chores and assignments, but they can play the clown where they feel at ease.

A Catahoula leopard dog has a strong bone structure with a deep chest and a flat, broad skull. Its coat is thick and short, often black, tawny and merle in color (with spots). The hind legs, tail and belly can be slightly longer haired. The lop ears of this American dog are narrow to medium in size. There are many influences in the appearance of these dogs. Their exact lineage is still unknown, but they are thought to have descended from crosses between wild American dogs, red wolves, and dog breeds brought to the New World by Spanish explorers, such as Mastiffs and Greyhounds . Yet his appearance is not reminiscent of a sighthound or dog-like. This muscular dog is slightly longer than tall. It usually weighs between 18 and 23 kg and is about 51 to 66 cm high.

Catahoula leapard dogs are very resistant and not too prone to health ailments. Their single coat sheds continuously but moderately and does not require much maintenance. Weekly brushing and biennial baths are sufficient to keep the coat healthy. It is important to take good care of the teeth, to clean the ears regularly and to trim the nails regularly. This versatile four-legged friend needs a lot of exercise as well as human companionship. He also needs a resilient owner with strong leadership qualities. On average, this breed is 12 to 13 years old.