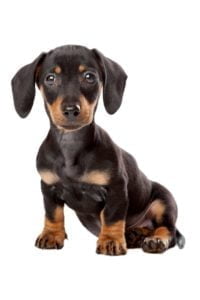 Are you interested in buying this Dachshund? Please contact us and ask for availability. We regularly have new litters with cute puppies.

The official name for a Dachshund is a Dachshund. The Dachshund is known as a friendly family dog. Originally he is a talented tracking dog, perfect for hunting badgers, foxes and rabbits. This intelligent, mischievous purebred dog can be quite disobedient as a puppy. It is even known that they can manipulate their owners to get their way. These star actors seek eye contact to make resolute owners change their minds. They need to know who is boss from childhood. Once a Dachshund has learned this, he is very loyal. This loyal companion gets along well with children and other pets. Dachshunds have an independent mind and are alert and active.

With its adorable appearance, the Dachshund is often in the top lists of the most popular dogs. The combination of the long, muscular body, the confident look and the short legs give a Dachshund something comical. There are 3 variants in terms of hair. There are long-haired, wire-haired and short-haired Dachshunds. They have a smooth, shiny coat that is usually black, brown or gray in color. A standard size Dachshund is about 35 cm and weighs a maximum of 9 kg. A Miniature Dachshund reaches a maximum of 35 cm and around 6.5 kg. Then you also have a ‘Kaninchen’ Teckel (rabbit in German). This smallest variant of the Dachshund grows to only 30 cm and weighs around 4.5 kg.

Dachshunds can bark loud and deep. They have the instinct of a hunting dog and you can tell by their behavior. Toys are considered prey and they can dig things up in the garden. They need a patient and consistent trainer. The Dachshund loves to walk outside and romp with other dogs. In a large garden or forest you can let it dig and hunt to your heart’s content. They are energetic and need a lot of exercise. It is important to keep a close eye on a Dachshund’s eating behavior. Overweight Dachshunds can become lazy and have back problems due to the extra body weight. A healthy Dachshund can live to be 12 to 16 years old.