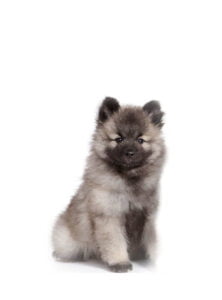 Are you interested in buying this Wolfskees? Please contact us and ask for availability. We regularly have new litters with cute puppies.

Because the Wolf Kees is primarily a keeper and alert protector, it is a dog without a hunting instinct. Today, this pleasant, sensible and balanced four-legged friend is mainly bought as a loyal house companion. This cheerful dog is attached to his home. It is the domain he wants to protect so it will not run away easily. Wolfskezen are perfectly suited as family dogs. They are very good with children, attach importance to hygiene and adapt easily. They get along particularly well with other dogs. Due to their guarding instinct, they do not like to be left outside for long. Then they start barking. After all, they want to stay with their family to keep an eye on things. Although they are naturally sweet and friendly, they are vigilant towards strangers and can be stubborn at times.

The wolf spitz differs from the big spitz mainly in length and coat color. On average he is about 4 cm taller and of course he is known for his typical wolf gray coat color: silver gray with black hair tips. His enchanting, dark almond-shaped eyes and soft, long coat make him an attractive playmate, even for young children. The shoulder height of the wolfkees is 43 to 55 cm.

The Wolf Kees has a thick, hard, double coat with a soft undercoat. The coat is dirt-resistant, so this dog rarely needs a bath. Wolfhounds also keep themselves very clean. During the moulting period, some extra care, such as daily brushing and possibly a bath, is certainly not a bad idea. The nails and pads of this dog should be checked regularly and the hair underfoot trimmed to the height of the pads. The agile and agile wolf dog loves to participate in family activities and learn tricks. He loves walks, ball games or romping with a rope or Frisbee. A wolf’s boulder weighs about 18 to 20 kg and can live to be 10 to 14 years old.

The popular wolf bane, sometimes spitz is often regarded as an authentic Dutch breed. This breed originated from the re-breeding of large keeshounds in England in the 1920s, especially this beloved Dutch wolf-gray variety. This particular type of keeshond became so well known in England that it was also referred to there by the word ‘Keeshond’. The breed is named after ‘Kees’, the dog of 18 the century Cornelis de Gyselaar. This dog became the symbol of the Dutch patriots, of which his owner was the leader. This Dutch watchdog was responsible for protecting homes, farms and inland vessels. This breed is considered one of the oldest dog breeds in Central Europe. In addition to the dwarf it is the only recognized variant in both England and America.