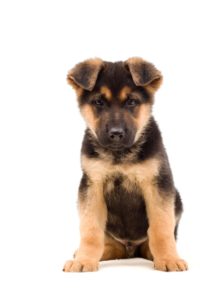 Are you interested in buying this German shepherd? Please contact us and ask for availability. We regularly have new litters with cute puppies.

A German Shepherd, related to the Belgian shepherd , is loyal to his family and protective. This four-legged friend is also very suspicious of strangers. These dogs are very lively and get bored easily. But they get along with other pets and children. They love to interact and don’t like to be left alone for long. German Shepherds are hard workers with deep dedication and loyalty to their owners. This versatile companion is still one of the most popular breeds in the world today. In Flanders he is also called ‘German shipper’. ‘Scheper’ is just another word for ‘shepherd’.

The German Shepherd has a powerful, muscular body. The male of the German Shepherd is on average 62 cm high and the bitch 57 cm. In terms of coat you have three variants: the stick-haired, the long-haired and the long-haired German Shepherd. The most common colors are black, iron gray and ash color. They come in one color as well as with regular greyish white, yellow or brown markings. You often see this breed with a dark clouded or black saddle on the coat.

German Shepherds are among the most popular dog breeds for a reason. Their courageous and versatile nature also makes them popular in fiction, especially in post-apocalyptic settings. In reality they are often used by police and military services and in guiding and assisting disabled people. They can herd, search, rescue and are very efficient at drug detection. So a German Shepherd likes to have a position.

As a family dog, he needs a lot of exercise. Walking three times a day is no exaggeration. So you can only keep him in an apartment if he can walk, play and romp around freely. And you also have to give him a lot of attention. German Shepherd puppies are easy to train. They are obedient by nature and learn quickly. A German Shepherd sheds hair but you can minimize this by brushing it daily. He lives on average 12 to 13 years.